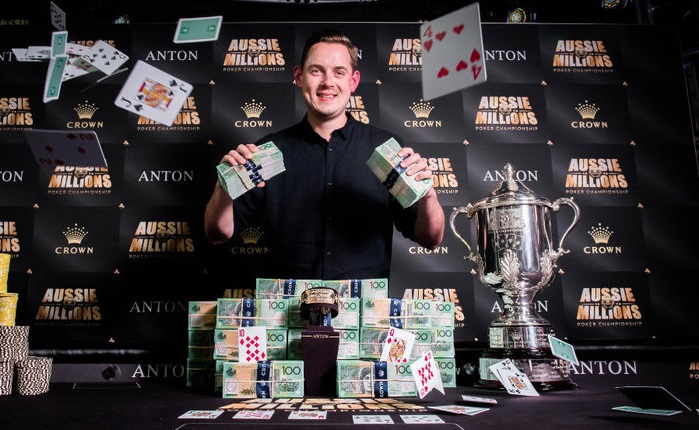 After seven days of non-stop action, it was finally time for the Main Event. There were seven players at the final table, two Aussies Ben Richardson and Chul-Hyon Park, Belgium’s Johan Schumacher, Norway’s Espen Solaas, Switzerland’s Stefan Huber, Mike Del Vecchio from the USA, and of course, the Brit Toby Lewis.

Toby came into the finals with a massive chip lead and as a clear favourite. However, he didn’t let that get into his head. Toby said that he didn’t want to let his guard down and tried not to “hype” himself up too much, so he stayed off the social media.

When the day of the finals came, Toby was calm and used his chip advantage and experience to dominate the table.

The final hand was between Toby and Huber. Huber’s cards were the eight of diamonds and ace of spades. On the other hand, Toby had the queen of diamonds and ten of diamonds. The flop brought two queens, making Toby a clear winner with a three of a kind.

This is Toby’s most significant win so far. Despite being a relatively unknown name on the poker sites, he has had quite a bit of success at the live poker tournaments. His previous major achievement was winning the European Poker tour Vilamoura Main Event in 2010. With the 2018 Aussie Millions purse, he has now earned well over $4 million in prize pool money.