Prepare for a Globetrotting Adventure with the 888poker Live Tour 2018

Earlier this week 888poker, one of the best UK poker sites, announced the dates for its 2018 Live Tour. The tour will have eight stops in total, and it’s a real globetrotting adventure. 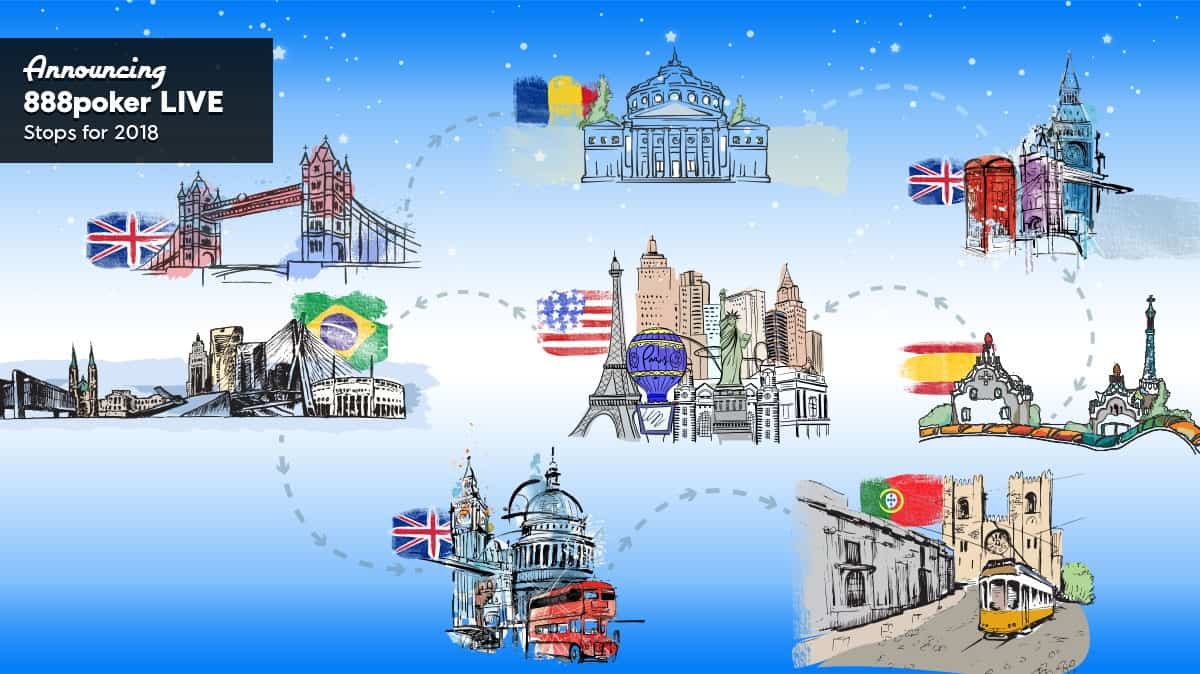 The tour kicks off with an event in London at Aspers Casino. The tournament is appropriately named 888LIVE 2018 Kick-off, and it will have a £440 buy-in. The event starts on February 2nd and ends on February 11th. The next stop is Bucharest, Romania. Players will get to compete for €50.000 GTD at JW Marriot Hotel. The tournament lasts from February 28th through March 4th and has a €220 buy-in.

After that, on April 1st, 888poker Live Tour heads back to London for the WPT500 Easter event. From there the tour moves to Barcelona, Spain for the 888poker LIVE Barcelona event, which will take place from May 23rd – June 4th.

Barcelona is the last event in Europe before the tour jets off to the USA. From May 30th – July 15th 888poker will host both the Crazy 8’s tournament and the World Series of Poker 2018 Main Event in Las Vegas. After the Main Event, 888poker will be travelling to Sao Paulo, Brazil in September.

Afterwards, the tour is returning to the mainland of Europe, first stop being London for the 888poker LIVE London event. The event will take place in Aspers Casino from November 23rd – December 2nd. Finally, 888poker Live Tour ends in Lisbon, Portugal with the 888poker LIVE Portugal event in December.

If you are planning to compete in any of these tournaments, you should check out the 888poker website. They are organising a ton of satellites and qualifying tournaments throughout the year where you can win a cheap seat for any 888poker live event.

But regardless if you are planning to compete in these events or just watch them online, there is no doubt that 888poker Live Tour 2018 is going to be action-packed. The best part, we don’t have to wait for too long, as the London event is less than a week away.