Sylvia Hewitt Walks away with $23.000 after Venetian Deepstack

Sylvia Hewitt, a regular at many best UK poker sites, scores another win and substantial prize. She managed to come out on top of the $500 No-Limit Hold’em $40K GTD event at Venetian Deepstack. 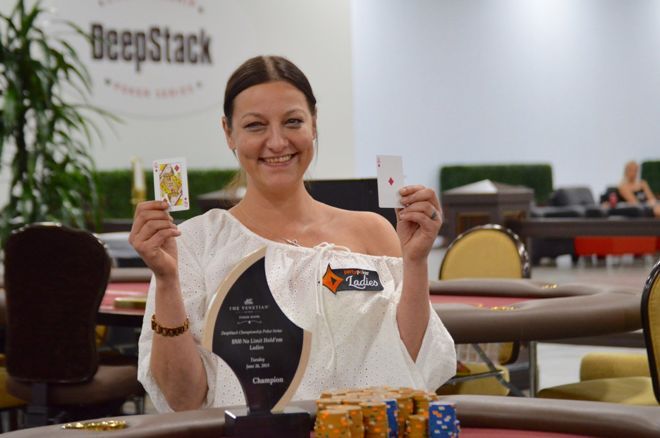 The British grinder was one of the 222 people competing for the prize. Though the tournament planned to distribute $40K to first 24 players, the organisers ended up giving away around $55K. Hewitt herself won $19K.

It was clear all throughout the tournament that Sylvia was a favourite. She breezed through day two and entered day three with a chip lead. Additionally, she was able to increase her lead substantially when she struck out a fellow contender with her pocket aces. Sylvia increased her stack to 900.000 chips, almost three times the average at the table. The Brit then pushed for her lead to a million, and, after about three hours, she was declared a winner. Charlie Godwin came in second, and PartyPoker ambassador, Natalia Berviglieri finished third.

However, Sylvia didn’t walk away with the whole $24K. She seemingly made a deal and walked away with “only” $19.000. Even so, this is one of her biggest cash prizes to date in a live tournament. Her largest cash out came in November 2016, when she won £30K at the £550 Deepstack. Moreover, her second biggest payout was at the $2.700 PartyPoker MILLIONS 6-Max event where she earned £20K.

So what’s next for Hewitt? Well, it seems she’ll be going to Rio All-Suite & Casino for the WSOP Ladies Championship. The tenacious Sheffield grinder doesn’t have a bracelet yet, so she’ll surely want a piece of that action.

1 month ago - by N. Vasiljevic