Poker is one of the most popular card games across the world. Some historians say that its origins go back to China, where it was first played by a Chinese emperor back in the 10th century. Others say poker is a successor of an old Persian card game called “As Nas.” Its European predecessor was called poque, and it was popular in 17th century France.

Nowadays, everyone can enjoy this card game both in physical casinos and via poker sites. What’s more, WSOP statistics show that there are more than 100 million players doing so.

1. The World Series of Poker is over 51 years old.

It all started back in 1970, in Binion’s Horseshoe Casino. At the time, the casino didn’ even have a dedicated poker room. Jack Binion, the owner, simply invited the most famous poker players at the time to play at his establishment. It wasn’t a tournament as we think of them, and the winner didn’t get a WSOP bracelet but a silver cup. The event consisted of players meeting and playing mixed cash games for a few days, and the best player was chosen by a straight vote.

Johnny Moss Moss has received a silver cup and got to keep the cash he earned during the tournament. He won the tournament again the following year by defeating seven other players and again in 1974. He played at every WSOP tournament from 1970 until 1995, and according to WSOP stats, he won nine WSOP bracelets. 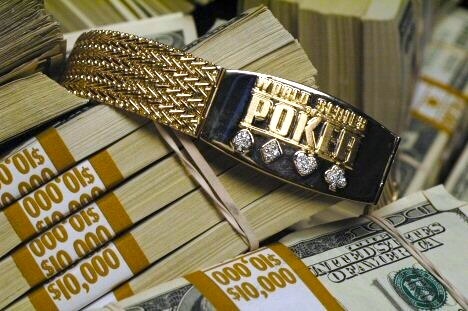 Moneymaker won the Main Event at the 2003 WSOP after entering an online satellite tournament. He was the first person ever to win this prestigious event after qualifying at an online poker site. Prior to that, he worked as an accountant, and today there’s even the term “Moneymaker effect” which refers to the sudden growth of interest in poker. In 2019, Moneymaker became a part of the Poker Hall of Fame.

4. The Main Event of WSOP 2004 had over three times as many entrants as the previous year’s.

WSOP player stats indicate that after the Moneymaker wrote new pages in poker history, the number of participants grew from 839 to 2,576 in just a year. Even though Dan Harrington (the winner of the WSOP 1995) was the favourite for the prize, it went into the hands of Greg Raymer. Raymer went home with $5 million in prize money.

This happened on the WSOP Main Event back in 2006 when Jamie Gold was crowned the World Champion. On the 10th of August, he won $12 million, and WSOP online stats show that Paul Wasicka ended up second with the prize of $6.1 million. This was the first time all events were held at the Rio Hotel & Casino and not at Binion’s Horseshoe.

If you are a poker enthusiast, then you know the name Phil Hellmuth. He’s in a convincing lead with the highest number of gold bracelets. The runners up Doyle Brunson, Phil Ivey, and Johnny Chan have ten bracelets each and hadn’t had much success in recent tournaments. Hellmuth gathered his bracelets over almost three decades of playing – he won his first bracelet back in 1989 and the latest one in 2018.

7. Players from the US have the highest earnings at over $2.5 billion.

World Series of Poker statistics reveal that the US players have made more earnings than all the other countries combined. That’s not such a surprise as the majority of these events take place in Las Vegas. However, there is a massive gap between the US and the second place on that list, which belongs to Canada with $193 million and the UK in the third spot with $147 million.

8. The youngest WSOP Main Event winner was 21 years old at the time.

Out of all the WSOP main event winners, Joseph Cada is the youngest. He was only 21 when he won the 2009 WSOP Main Event and claimed a total of $8,546,435. Cada started playing online poker around the age of 16 and, at the time the tournament took place, he had about six years of experience. The previous holder of this title, Peter Eastgate, was 22 when he won the 2008 WSOP.

9. The 2012 WSOP Main Event had the longest final table in history.

This final table lasted for 399 hands. The tournament welcomed 6,598 players, but Antonio Esfandiari beat them all and took home $18.3 million in prize money. According to available WSOP statistics, this was the biggest payout ever.

The top six Main Event players were all from the US, and each of them won more than $1.8m. John Cynn was crowned champion with the $8.8 million in winnings and the Main Event bracelet. Phil Hellmuth won his 15th WSOP bracelet this year.

This poker tournament will be hosted at the Rio All-Suite Hotel and Casino in Las Vegas, Nevada. The Main Event should start on November 4. and last till November 17. In 2020, all live events were cancelled due to the pandemic, and the tournament was held online. Online poker stats show that this was the biggest online tournament in the history of US poker.

How do I check my online poker results?

How do I see my PokerStars stats?

At PokerStars, players can request different information and check the tournament history, cash game statistics, and much more. Once you create an account, you can check your stats by going to Tools > History and Stats > Get Tournament History. In addition to your individual scores, you can also review the official poker rankings and WSOP statistics.